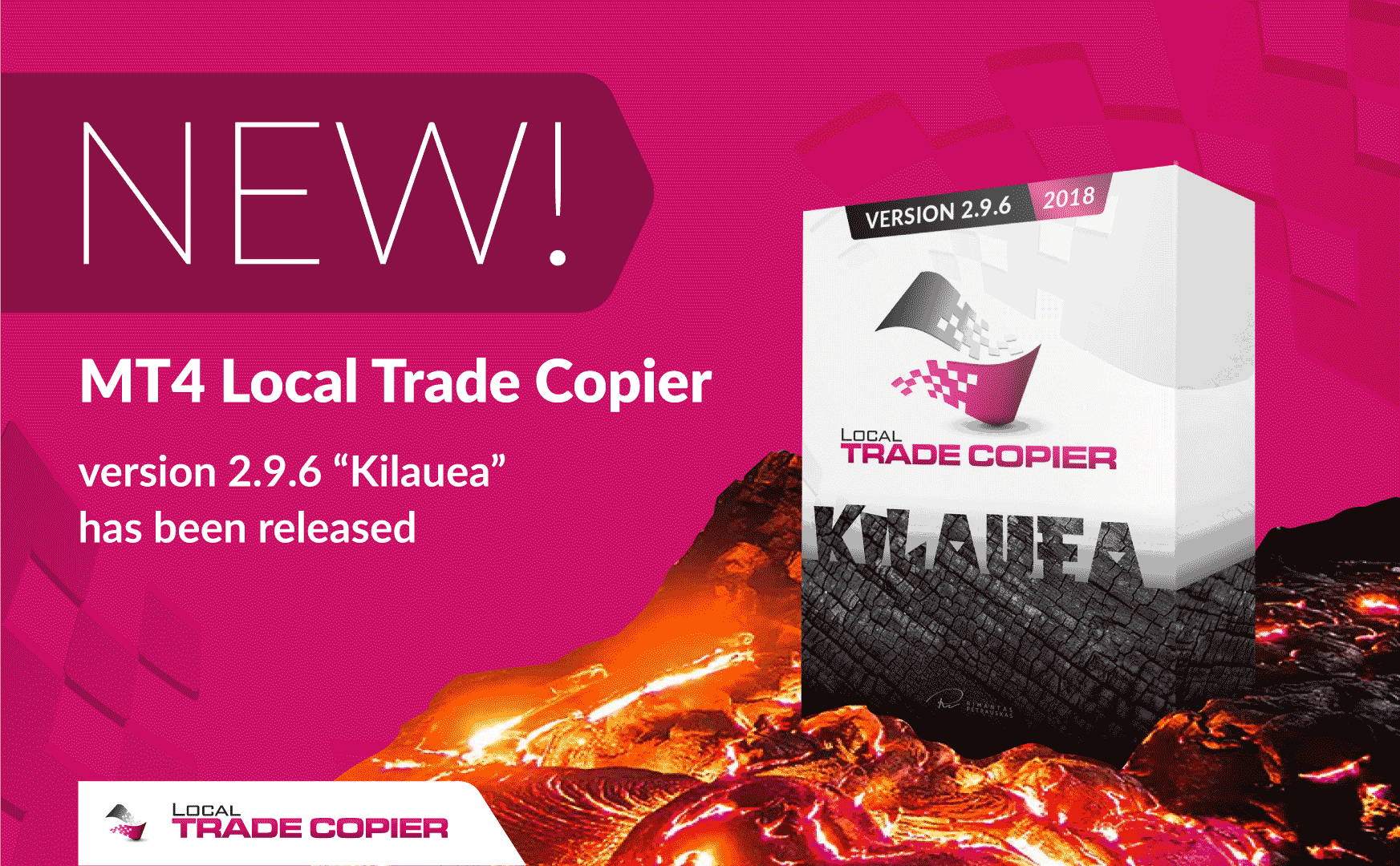 I have just released the new Local Trade Copier version 2.9.6 “Kilauea” named after the currently active shield volcano in the Hawaiian Islands.

Why did I call LTC 2.9.6 Kilauea? I’ve been traveling in Hawaii March 2018 and watched amazing Kilauea lava flows and it’s been all over the news recently because of a recent Kilauea eruption. Let’s pray that the situation won’t get worse in Hawaii.

Here’s me two months ago watching Kilauea lava flows before the disaster in Leilani Estates: 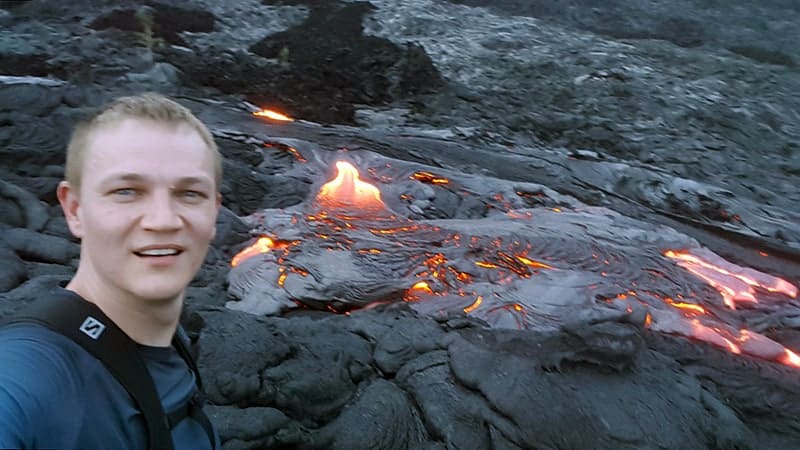 I have added new cool features which makes the trade copier even more powerful. Follow these steps to upgrade to the latest Trade Copier version.

The new LTC is now able to do Netting of open positions when operating on MT4 accounts with FIFO restrictions. It is beneficial for traders in the United States because now the LTC copier will run much more efficiently. And yes, it works even with partial closes.

When working in “FIFO + Netting” mode, the Local Trade Copier is now able to copy trades from regular trading accounts into the U.S. accounts with FIFO limitations.

More information: How to use Local Trade Copier in Netting mode on MT4 accounts with FIFO limitations.

You’ll notice computer and internet speed status displayed at the top of the chart right above the LTC EA dashboard.

I’ve added this so you can see how’s your computer and internet connection quality affecting auto trade copier functions. 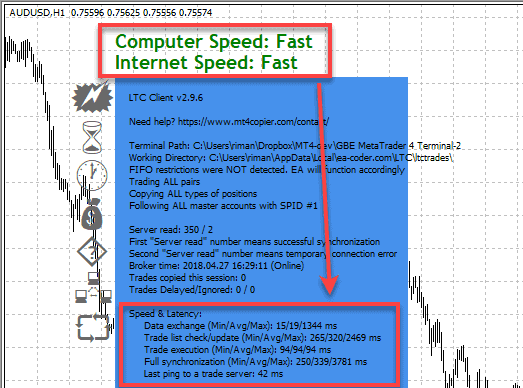 Above is the screenshot of the chart displayed speed status “Fast” for both, computer and internet connection. That’s what you want to see most of the time.

If the speed status is “Slow” or “Normal”, then you should take actions to improve the environment for the trade copier software so that it can copy trades at full potential.

If your computer is overloaded or your account has too many open trades, then the trade copier might experience delays when copying trades.

Trade copier will not work efficiently if your computer is overloaded or your Internet connection quality is poor.

Trade copier will not work well if you’ll use it on a cheap VPS server which cannot even run two MT4 terminals without being overloaded.

More information: How to know if my computer and internet speed is not slowing down the trade copier.

We’ve added a new parameter to the Client EA – DontManageTradesOpenedBefore.

By default, it’s set to 2010.01.01 which means EA will not touch any of the trades opened before that date. 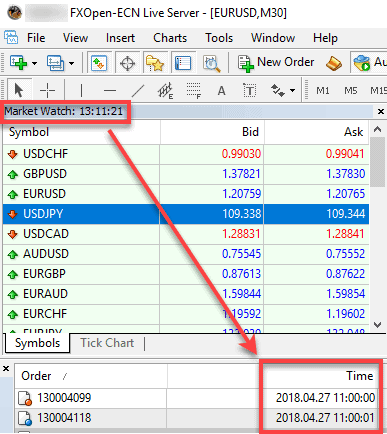 4) Do NOT close these trades!

For advanced users who have lots of open positions that should not be closed by the Client EA, I’ve implemented a new parameter called MarkAllTrades_DoNotClose.

It can get quite advanced because you can mark which trades cannot be closed by the Client EA but should be updated by following master account. You can also mark trades with the ‘do not close’ tag from your Expert Advisor or even manually. Usually, only advanced users require such functionality, and therefore this parameter is available just for the VIP plan.

Marked trades which MT4 trade copier cannot close. Their SL/TP changes will still be updated by following the master account.

More information: How to tell MT4 trade copier not to close specific trades but keep updating them

5) Leverage of a client account affects the lot size

If the leverage size match then it won’t affect the lot size.

However, if the leverage size of the client account is smaller than the leverage of the master account, it will affect the lot size by making it lower as well.

The lot size is affected only in the case when the leverage of a client account is smaller.

Master account opens a trade of 1.0 lot, but the client account will have the same trade copied only of 0.25 lot (instead of 1.0 lots). It is because client’s account leverage size is 4 times smaller and copying a full 1.0 lot trade might damage the account.

If you want a bigger trade size on the client account despite the risk, then increase it by using money management parameters. In this example, LotMultiplier of 4.0 would do the job.

Master account opens a trade of 1.0 lot. The client account will have the same trade copied at the same size of 1.0 lot regardless higher leverage. Even though the client’s account leverage size is 20 times bigger, the trade size copied will not be affected to avoid account damage and unexpected results. If you want a bigger trade size in such scenario, then increase it by using money management parameters. In this example, LotMultiplier of 20.0 would do the job.

6) When the Server EA detects a new trade, it will tell how long ago the trade opened

We’ve noticed quite a few cases when the trade seems to get copied too late, and if the Client EA is set to ignore the price deviation (or it is high enough) it might damage the client account.

At first, it seemed like the Server EA is the one to blame, but after lots of tests, we’ve noticed that Server EA did its job correctly. The trade appeared on the master account too late. Do not ask me how is this possible (a few possible reasons below), but to avoid any misunderstandings I’ve introduced a new feature into the Server EA to show how long ago the trade opened at the moment Server EA detects it.

If we see that the trade opened seconds ago, then everything is normal.

But if we see that the trade opened minutes or hours ago, then it is NOT normal.

Trades on MT4 can appear too late because of these issues:

What I am trying to say is that it is not Local Trade Copier fault if the trade appears too late on the account when it was actually opened hours ago.

Server EA detected a trade which was not visible for some time after it got opened.

Above is an example of a trade detected which was not visible immediately after it got opened. If you see such messages then double check if you are not having any of the issues listed above.

We’ve changed the way the software handles trade copying in situations when the market is closed or broker is performing a rollover. Usually, broker server returns error #132 ERR_MARKET_CLOSED.

In previous versions, if a Client EA receives a trade and broker is performing a rollover (usually at midnight) or the market is closed, then the Client EA would ignore such trade, and it would be not copied.

In the new Local Trade Copier 2.9.6, the Client EA will delay the trade until it is possible to copy it. In other words, Client EA will wait until the market opens or the rollover is over and then try again.

Here’s how it looks like when a trade is delayed because the market is closed:

Local Trade Copier delayed a trade #49711745 (SELL LIMIT EURJPYc) because the market is closed or broker is performing a rollover.

You’ll also see a red sand clock next to the blue dashboard which indicates there are trades delayed.

When the market reopens or the rollover is over, a trade copier will try to place delayed trades again. If it’s a success then the red sand clock icon will turn gray again, and you’ll see messages in the EXPERTS tab indicating that the trades were copied:

Note the notification message in the yellow area. It tells that there was a 28-second delay when copying this particular trade and then gives a few tips to improve this. However, in this situation we know we can ignore this because the trade was delayed because of a rollover.

We’ve changed the way the software handles trade copying in situations when the open price of a pending order on the client account too close to the market and the broker denies it. Usually, broker server returns error #130 ERR_INVALID_STOPS.

In previous versions, if a Client EA receives a trade and broker denies it with the error 130 because its open price is too close to market price, then the Client EA would ignore such trade, and it would be not copied.

In the new Local Trade Copier 2.9.6, the Client EA will delay the trade until it is possible to copy it. In other words, Client EA will wait until the market price is right according to the broker minimum distance requirements and then try again.

This can happen with pending orders (BUY STOP, SELL STOP, BUY LIMIT, and SELL LIMIT) because brokers have requirements and limitations in making trades. There is this parameter called StopLevel which tells the minimum allowed distance and its value differs for each broker. Some broker has it set to 0 (zero) which means there is no minimum distance limitation while others have it set to 10 pips or even 20 pips.

StopLevel of 20 pips means you cannot place pending orders at the price which is within a range of 20 pips from a current market price. This applies to the Expert Advisors too which means trade copier cannot place the trade within that range too. For example, if a Client EA try to copy BUY STOP at 1.2340 but the ASK price is at 1.2325 then the broker will return error 130, and Client EA will fail to place this order. Such pending order will be valid to place only if the ASK price drops below 1.2320 in which case the open price will be 20 pips away.

The new Local Trade Copier 2.9.6 is now even better and more reliable than ever before. And because of the FIFO and Netting functionality, it is probably the only solution to copy trades on MT4 for traders in the United States.

If you still don’t have a software to copy trades between MT4 account then start with the Local Trade Copier. It’s very easy to set it up and start copying trades, especially if you spend 30 minutes watching my videos how to use Trade Copier 😉