Today we will talk about a very important thing – SPEED. Especially for traders who are copying their trades to other MT4 accounts using Local Trade Copier.

The Local Trade Copier is one of the fastest trade copier’s available. Check the video below to see how fast it is:

It’s not some one-time lucky video with just copy speed. This is constant and works fast like this all the time if your computer/VPS is good and there are no Internet connection issues.

In fact, when Rimantas did this trade copier speed test his laptop was connected to a Wi-Fi. The test on a VPS server with a much better Internet connection would be even better.

However, some traders face speed issues when copying trades between MT4 accounts. Let’s solve this now.

The speed of trade copying depends on three things

The amount of time required to copy a trade depends on 3 things:

All these factors are very important. If one piece is out of order whole system can fail.

So from those numbers, we can do the calculations:

Looking at the average latency of 2.98ms it seems like everything is fine, and it is, in fact. But still, two bullets arrived later than the rest.

If there was no “max latency” measure we would never know that there were bullets who reached the target later. So when measuring latency (or arrival time in this case) it is important to measure not just the average time but also the minimum and the maximum values.

The trade copier shows latency report as well as you can see in the image below: 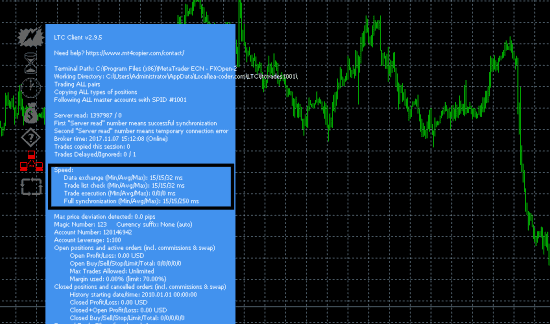 Local Trade Copier displays the “Speed & Latency” report in the blue dashboard and it shows 4 values:

But in case the Forex trade copier work slowly for you check out this guide on how to improve MT4 speed.

What I am trying to explain is that a reading from LTC copier shows the latency it detected to reach your broker’s server to complete the transaction. It could be that only one transaction took 8 seconds, while the rest were okay.

Huge delay while copying trades is not a normal thing, but sometimes it happens. I would say if the trade is copied in 1 second (1000ms) then it is okay. But if it took 2 seconds or more to copy the trade then something’s not right. But again, it could be that this is only for just one or two transactions out of a hundred.

In the image below we see that this account has lots of unusual delays while opening trades: 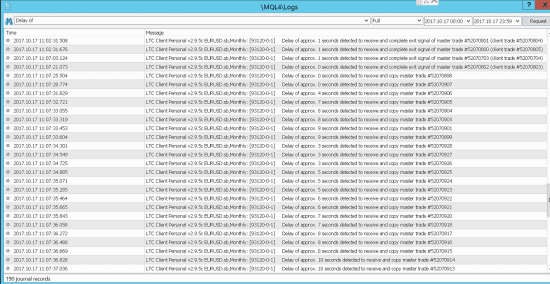 You need to make a lot of trades to have enough data to figure out if there is a general problem or it was a single trade which caused a delay.

The 8-second delay could have happened because of many reasons (here are few of them):

How to find out where the problem is exactly

You can do two things to find out where the trades get delayed:

Here’s the image below from the HotForex MT4 showing multiple Data Centers with different latency times: 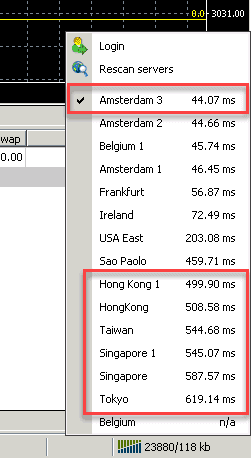 As you can see my MT4 is connected to the Data Center server in Amsterdam because I am located in Europe and this is the fastest server for me. In the meantime, the servers in Asia have a latency of 500ms and more. I could use those servers but it would make no sense.

If you are located in Asia then you will be connected to one of those servers and your latency will be 40ms or even better.

You can also try to control the speed of trade copy using the SyncRate parameter in the LTC EA. By default, it is set to 400ms and seems to be the most optimal for all computers. But don’t go lower than 100 ms, because most computers are not that fast anyway. In most cases it takes 100 ms or more to sync the information between MT4 terminals for the LTC and if you set sync rate to 10 ms or so it does not help much.

I hope the information in this post will help you to avoid delayed trades and losing trades because of execution problems.