By Rimantas PetrauskasUpdates
No Comments 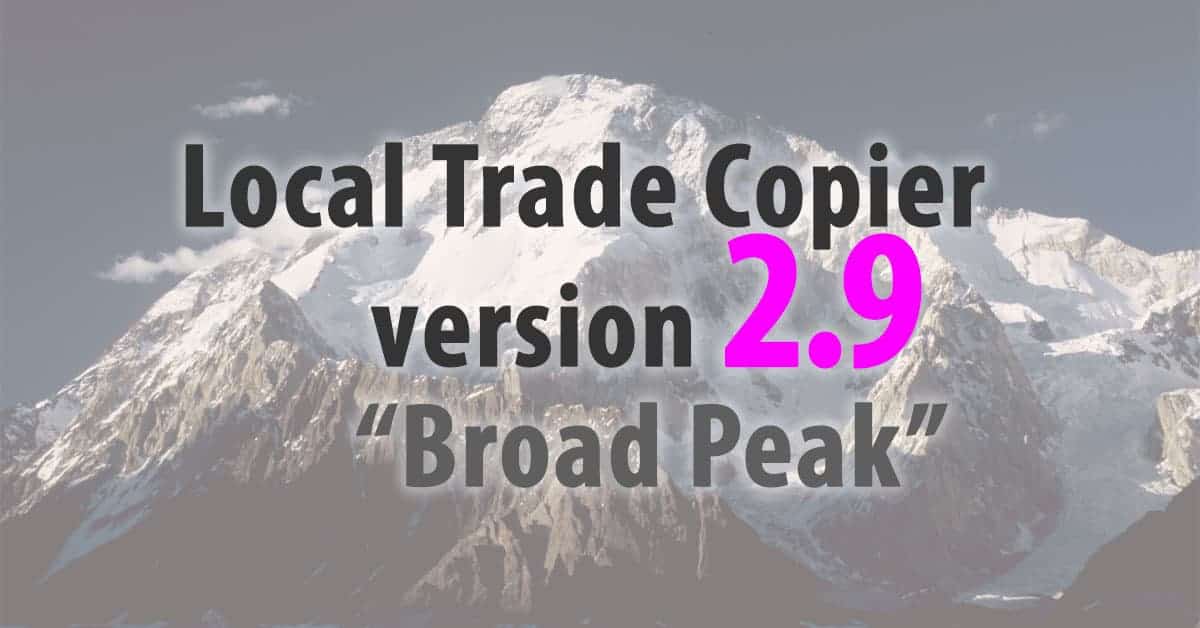 I have just released the new Local Trade Copier version 2.9 named “Broad Peak” after one of the eight-thousander Mountains.

Local Trade Copier is a special software for MetaTrader 4 platform which helps retail Forex traders and account managers duplicate trading positions between multiple accounts on the same computer so they won’t need to repeat the same trade operations on each MT4 platform individually.

Special thanks for my awesome customers. I’ve received so much feedback from you, which helps me improve LTC software month after month. Hundreds of retail traders and account managers already use LTC to manage millions of dollars since 2010.

Follow these steps to upgrade to the latest LTC version.

Now let’s take a look what has changed in the LTC v2.9.

Several new features has been added to LTC, but the most important thing to mention is that LTC is now much more reliable than it was before.

Let’s take a look at new features and improvements explained in detail below.

1. LTC is much more reliable now

Previously many of you witnessed these messages in your EXPERTS tab:

Even if I was never able to reproduce the same error on my computers, apparently many of my clients had this. So I have re-wrote the main code responsible for this and now LTC works much better.

This means LTC should not delays anymore and it should copy trades immediately. Obviously delays might occur for other reasons like price being too far or your account will have not enough margin, etc. So keep your eyes closely to the messages in the EXPERTS tab if you notice that some of the trades are not being copied right away.

Here’s a good article on how to read log files.

2. Visual explanation of some most common issues

LTC will now show you image that explains how to deal with some most common mistakes that people do when running the software.

I know that most of you are lazy and do not read instruction manual (no judging, I do not read manuals either unless something breaks ;-), so I am adding a few visual explanations on how to deal with some issues you might face.

For example if you forget to enter the license key you will get a picture that will show you where you need to enter it. Cool, right?

3. No need to enter license key every time you start the LTC EA

Previously you had to input the license key every time you start the EA.

But now, you can do this only once on each MT4 terminal and then later just leave license key parameter field empty. It should pick up your license key automatically from the memory even after you restart the MT4 or computer.

Server EA as well as Client EA is saving its last used parameters into file every time you start the EA. This allows you to load the last used settings anytime later.

But the Server EA was missing to save the value of the TradeComment parameter. Now this error is fixed.

5. Compatible with older version of LTC

LTC version 2.9 is compatible with the version 2.8. This means that you can update one EA at a time in case you do not want to update all of the EA’s you are running.

Client EA has improved currency suffix auto-detection system which makes using it more convenient on many brokers that use symbols with suffix for trading.

7. Trades that were not closed accidentally will be left to run

If you will use Client EA with AcceptTradeCloseSignals set at FALSE (to avoid trades being closed after they get closed on the master account) and there will be some trades NOT closed because of this, the EA will record their numbers into memory and later will leave them running even if you switch back the AcceptTradeCloseSignals to TRUE.

To close them you will have to interfere manually because EA will not manage them anymore.

I hope you will find these improvements useful. If you do not have the Local Trade Copier software yet, it is the best time to try it right now.