You don’t know it yet but, in a few short minutes you’re going to learn how to trade multiple MetaTrader accounts using the Local Trade Copier. You probably already know that MT4 trading platform does not give any option to trade multiple MT4 instances at once automatically, right? Well, let me jump straight to the point and explain to you how you can do this using the Local Trade Copier.

Do you remember the crazy old days where people did these jobs manually, you know hiring teams of many traders that would sit in front of many computers with the MetaTrader platform open and then once the chief trader said “okay everybody go along when you’re a dollar!”, everyone clicked the BUY button.

Imagine you have a computer or Virtual Private Server (VPS). Let’s simply call them, computer on the internet so to speak. The VPS is running for you 24 hours a day so it is very convenient to use such software on such servers. I personally have dozens of those VPS servers with lots of MetaTrader accounts running and I can assure you it’s exciting!

Up to this point you already understand that the Local Trade Copier consists of two components.

Even if someone else is executing trading positions for you somewhere remotely, they still kind of belong to you and can could do whatever you want with them. You just install Server EA in there, and now the Server EA will be sending all the trading actions to clients.

The second component, the Client EA, will be running on each MetaTrader account that you have. It will act as the client, receiving the trades and repeating them on MetaTrader accounts. You can have unlimited client accounts depending on your computer power. For example, if you take a VPS server which costs around $20 a month, you will be able to run about 4 to 5 MetaTrader instances or so.

If you will be use your home you might run even more MT4 instances. Personal computers these days are so powerful with all those multi-core CPU processors and huge amounts of RAM memory. You could be running 10, 20 or maybe even 30 MetaTrader platforms on one computer, allowing you to copy trades to dozens of MT4 accounts at once on the same computer.

Obviously, you remember the linking I spoke about at the beginning of this article. So when you connect MT4 platforms, the setup will look like in the picture below. 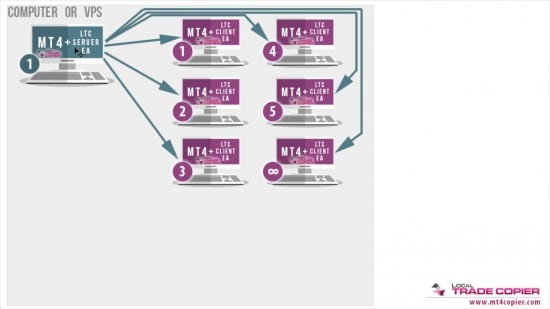 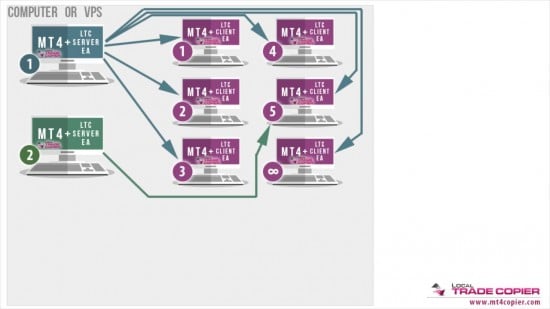 I wonder if you’ve already noticed that you are half way into the article! So, let’s go to the next level, which could get you even to a more advanced stage.

Let’s say I get the third MetaTrader account which will first act as the client account receiving trades from masters 1 & 2, and also act as a server account copying the trades to other two MetaTrader client accounts numbered as 6 & 7 in this demonstration. 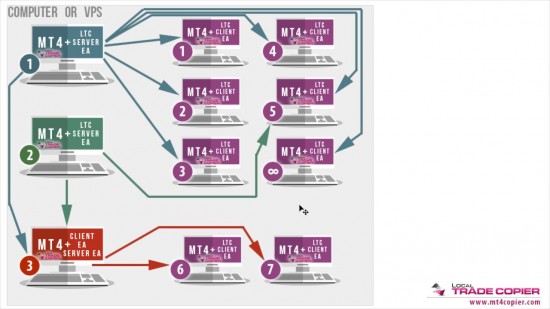 So we have a computer or a VPS with a lot of MetaTrader accounts copying trades to other client MetaTrader accounts. It is obviously quite a complicated set up but I hope you guys will not get confused by that as I have just tried to draw this quite as simple as possible.

Now at some point you want to change something, close some trades or you are additionally trading manually on one of those masters and need to place a new order. Whatever reason you have, it’s your business. The point is, if you must do this while you’re going about your daily business as usual, like standing in line at your grocery store or whatever activity it maybe, it is very easy!

Just pull out your iPhone or Android Smartphone, open your MT4 Mobile app (MetaTrader has a mobile version of the app) and do any trading actions you need. From your MT4 Mobile app you can log into any of those master or client accounts and do whatever you want. You can close some trades, check how the things are going or even additionally execute some trades in one of those master accounts and so on. 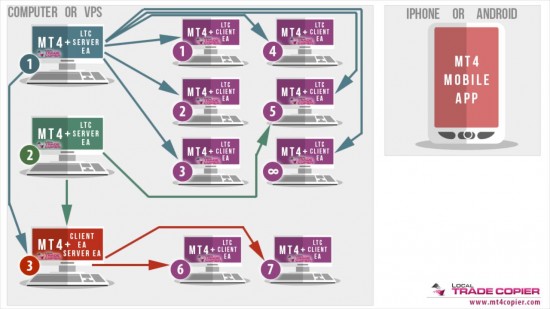 What if you must travel and are on the road? You can pull out your laptop, open your MT4 platform anytime, log into one of those MT4 accounts and do whatever you may want to do on them. Same thing applies even if you maybe in your home office or at work and working on your laptop.

So basically, there are so many ways to log in and see, observe, make some changes and execute trades and so on. 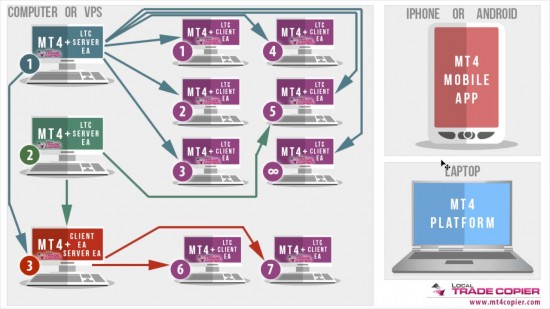 As you can see, Local Trade Copier quite powerful! The problem is that a lot of people do not understand this simple concept that you can execute trades remotely from any other device on the same master account that you are running on another computer with the Local Trade Copier setup and all these will be copied to your client’s account.

What is important is that you have MetaTraders running all the time and that’s why I recommend you to get a VPS Server. Once you get that, you will see that basically there are no limits how you can set this up.

So hope you guys enjoyed Local Trade Copier explanation of how it works. Please share this article with your friends and those you think it might help. Post your comments below. I always answer questions you have.

I am the creator of the Local Trade Copier program and a professional developer of Forex trading signal delivery software for MetaTrader 4 client terminal. Also I am into 100% automated currency trading that generates profits while I enjoy the time with my family, our life and traveling.