This is part two of the story that was shared by one of my customers about his friend “Bob”. He was looking for a way to make a profit in Forex trading and finally found his own method.

Bob is a losing Forex trader, but he still makes me money! That’s not his real name of course. Bob is one of those losing trader friends that everyone loves to have. He’s an ‘’opposite trader’’. You love to hear that he’s on the opposite side of your trades as he’s consistently and strikingly wrong. He doesn’t trade blindly and without a method to his madness.

The problem with Bob is that he takes all the golden trading rules and reverses them on their head. He trades against the trend. He cuts his winners short. He lets his losses mount. If you haven’t read it yet, you can read more about my friend Bob in part 1 of this series.

Now that you’re caught up with the story, let’s move on to part 2. We left off part one as I just discovered a promising new trading tool that should help me take Bob’s losing trades and reverse them on their head. The tool is called the Local Trade Copier.

Click here to read more about all of the neat features that this trading tool has.

This tool promises to do what other trade copiers couldn’t do or just were too lazy to implement, a way to reverse trades from one account to another.

This feature, if it works as promised, will allow me to copy my friends losing trades and turn them into winners (fingers crossed). The feature should also reverse the stop loss and take profit orders from one account to the other. Whenever my friend’s trades close too soon at his small take profit levels I should have my stop loss hit and be out of the trade with a small loss. And reverse, whenever he lets his losses mount and uses a wide stop loss, that same wide stop loss order would be set as a take profit order on my end, permitting me to let my winners ride. In theory, if this works, there should be no need for any manual intervention from my end, allowing me to finally get some uninterrupted sleeping time.

I will document the process of setting up the software below so that you can follow me on my journey and who knows, maybe this will prove useful for you once you find your own ‘’Bob’’.

With the purchases of the software, I got 2 installer files called LTC Client and LTC Server plus a long and detailed 23-page manual.

I went through the manual quickly and started setting up the software.

The first step was to just run the installers and install the files in the proper Metatrader 4 folders. The Server EA should be installed to the Metatrader platform where my friend’s account with the investor password is located. This EA will send the signals from that account and copy them to my trading account. The Client EA will need to be installed to my other Metatrader platform, where I have my real account. This EA will receive the signals generated by the Server EA and replicate them to my account. This first step was very easy to do, both installers scan your computer for any Metatrader 4 applications and present you with a list to choose from. From there you just follow the simple installation instructions. 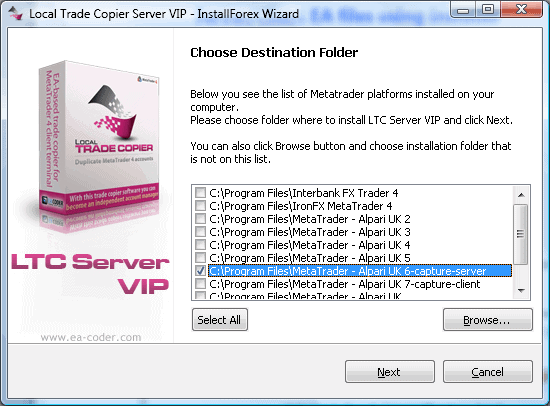 Step Number 2 – Setting up and configuring the EA’s

The second step is a little more complicated. After you’ve installed the files, start your Metatrader platform and open your Navigator window. Under Expert Advisor you will see LTC Server EA. Now drag the indicator from the Navigator window to any chart. The following picture will appear. 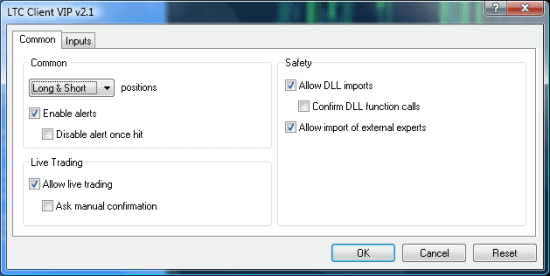 Make sure to check the boxes as shown on the picture above. The initial step for both the Server and Client EA is the same and you should have both set up as shown above.

While setting up the Server EA was relatively simple, the Client EA required me to do some tinkering in order to reverse my friend’s trades and also to lower his trading size. I did this by going to the ‘’Inputs’’ tab, that you can find just next to the ‘’Common’’ tab you just had open. There are in total 73 possible inputs in here. Anything and everything from setting maximum deviation per trade, choosing which pairs to trade, setting a maximum risk for the account, to things like enabling alerts to your email or push notifications to your iPhone or Android device.

When I first looked at all the options I felt like a kid in a candy store. I wanted to try them all and see how they worked! I probably did this for an hour or two before I realized it was 2 am in the morning and I needed to go to sleep. But the time I spent doing this wasn’t wasted as I found few extra options that I later implemented as additional safeguards on my account.

You can find the ‘’Reverse Trade’’ input near the top of the inputs. There are 2 values to choose from, true and false. The default is set to ‘’False’’ and you need to pick ‘’True’’ to turn the feature on as shown on the picture below.

With that setup, the next step was to lower the trading size fivefold from my friend’s account to mine. Even though our accounts were the same size, he risked way too much per trade. I did this by going to the ‘’LotMultiplier’’ input tab and changing the default 0 setting to 0.2 as shown below. Now all trades that in my account will get copied with 5 times lower trading size.

I made a big oops when I first turned on the EA. I forgot that I needed to turn on the reverse trades feature. As luck would have it, my friend opened a sell on the EUR/USD currency pair before I could notice this. In less than a second, the sell trade was replicated in my account. Oops!

I quickly closed the trade and changed the default setting to ‘’True’’. Luckily I already had the LotMultiplier feature implemented by this point and my friends 10,000 trade got copied as a smaller 2,000 trade on my end, so no major damage was done.

Most of Bob’s trades weren’t crazy random trades as he was following his rules and had a trading method, even though it was the wrong one. But as a beginner trader, in the game for only a couple of months, he still hasn’t developed the discipline needed to follow a method 100%. Although rarely, Bob still took some random impulse trades that had lot sizes that were a lot larger than usual. I didn’t want those trades implemented in my trading account at all, not even with a fivefold smaller size.

The Local Trade Copier comes to the rescue once again! The Inputs Feature I used for this is called ‘’MaxLotSizeAllowed’’. Here I set the maximum lot size to 2,000 units or 0.02 lots.

To further protect my account, I used several other features that the Local Trade Copier offers.

I used the ‘’MaxTrades’’ feature to limit the maximum number of trades to five.

I used the ‘’MarginLimitPercent’’ feature to implement a margin limit of 85% instead of the default 70% just for some extra added protection. With this option turned on, the Client EA will not open new trades if my account margin drops below 85%.

To protect against any foolish mistakes my friend might make, like forgetting to put in a stop loss, I implemented a feature called ‘’ZeroStopLossOrderCloseInSeconds’’. I set it to 120 seconds as that was how long Bob usually took to put in his stop loss and take profit orders. If after 120 seconds the opened trade still doesn’t have a stop loss in place, the EA will automatically close the trade. Pretty neat feature ha?

To prevent Bob from replicating any trades on exotic pairs with crazy spreads I used a feature called ‘’TradePairs’’. This feature will filter trades and only copy the trades if they’re placed on the pre-approved currency pairs. In the list I put most major currency pairs separated by a comma, as shown below.

I deliberately avoided the GBPJPY as I knew this was the pair of choice my friend used when he sometimes ‘’practiced scalping’’ as he would say.

All Done, All features implemented!

With all these features implemented I clicked the SAVE tab and saved the settings as a .set file so that I don’t have to manually input them each time I start the Client EA. It was now time to test this thing out. Will it work? I waited 30 minutes for my friend to put in a trade before realizing the time. It was 3 AM, I had to work the next day, so I left the Metatrader terminal open and went to bed.

Waking up to Profits!

I could finally take a well-earned sleep as I didn’t need to be up all night monitoring trades. The next morning I looked at my computer screen as soon as I woke up. I was greeted with two beautiful winning trades, a GBP/USD long trade that was up by 40 pips and an NZD/JPY short that was closed at a massive positive 80 pips. Going through the history I did notice two small losses of around 25 – 30 pips on the EUR/USD and the USD/CAD.

When I looked at my friend’s account I noticed that the same trades were reversed. He had an 82 pip loss on the NZD/JPY and two small wins on EUR/USD and USD/CAD that added 60 pips to his account. The Local Trade Copier worked perfectly. It replicated and reversed the trades as was intended and allowed me to get some sleep and make some money in the process!